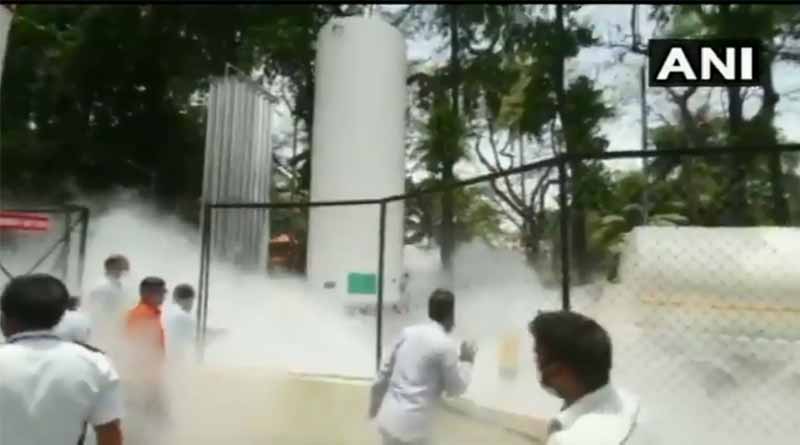 News Daily Digital Desk: Horrible situation due to oxygen leak at Nashik Hospital in Maharashtra. Twenty-two people have already died at the hospital due to lack of oxygen. The condition of 25 more people on ventilation is critical. The government of Maharashtra has accepted the veracity of the news. On Wednesday afternoon, Dr. Nasik of Maharashtra. The crash happened at Zakir Hussain Hospital. According to hospital sources, an oxygen tanker was being loaded this afternoon. At that time oxygen leaks from the tanker. According to sources, the tanker’s valve has a mechanical problem. Firefighters rushed to the spot to handle the situation. However, according to the latest news, the situation is still not under control. It’s an unfortunate incident. As per preliminary info, we’ve learned that 11 people died. We’re trying to get a detailed report. We’ve ordered an inquiry as well. Those who are responsible will not be spared: FDA Minister Dr Rajendra Shingane on Nashik Oxygen tanker leak incident pic.twitter.com/sT7M8XbatF— ANI (@ANI) April 21, 2021

Corona infection has taken a terrible form in the country. Most of the patients are suffering from lack of oxygen. Meanwhile, there is a shortage of oxygen supply. The situation in Maharashtra is even more deplorable. The incident of oxygen tanker leak in the hospital in such a situation is undoubtedly alarming. Lack of oxygen caused the hospital to collapse. It is learned that 31 people have already been sent to other hospitals. The rest of the angry people are trying to handle the situation with small oxygen cylinders. #WATCH | An Oxygen tanker leaked while tankers were being filled at Dr Zakir Hussain Hospital in Nashik, Maharashtra. Officials are present at the spot, operation to contain the leak is underway. Details awaited. pic.twitter.com/zsxnJscmBp— ANI (@ANI) April 21, 2021 Maharashtra Minister Dr. Rajendra Singhane said, “Eleven patients on ventilation have already died. How this happened will be investigated. Those who are guilty will not be spared. ” Former Maharashtra Chief Minister and BJP leader Devendra Fadnavis has expressed regret over the Nasik tragedy and demanded a full probe.