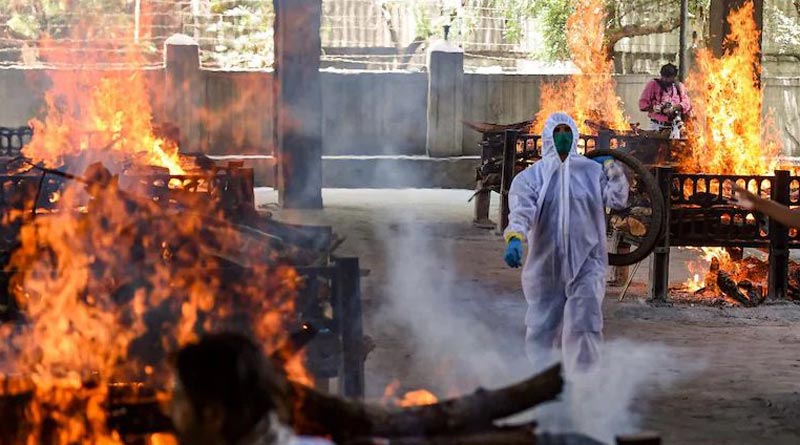 News Daily Digital Desk: India is now devastated by the COVID-19 storm. But this is not the end. In the second week of May, 33 to 35 lakh people across the country may be infected with covid! Scientists at IITs in Kanpur and Hyderabad have expressed concern that they have created a covid graph with arithmetic. According to a US study, the maximum number of deaths per day from coronavirus in India in mid-May could be 5,600! But there is only one hope. After being at the very top in the second and third weeks of May, the Covid graph will go down. The infection will subside a lot at the end of May. On Friday, in one day, three lakh 32 thousand people were infected with covid. 2,283 people died. This figure will drop in mid-May. 10 lakh Kovid patients will be found daily. Scientists from Kanpur and Hyderabad IITs followed the Susceptible, Undetected, Tested (Positive) and Removed Approach (Sutra) models in compiling this report. The number of covid infections will increase in Delhi, Haryana, Rajasthan and Telangana from April 25 to 30. Which Maharashtra and Chhattisgarh are seeing now. Maninder Agarwal, a professor of computer science at IIT Kanpur, said May 11-15 was too bad for India. The lines of the graph affected by the survey are also steeply straightened. Which proves that India has not yet overcome the Covid storm. Worse days ahead.

India has already surpassed the United States in setting a world record for daily transmission of terror. As can be seen now, the embarrassing picture of the crowd of patients lying on the sidewalk. As a result, despite government assurances of adequate oxygen, antidote and adequate hospital beds, the situation across the country is worrisome. In addition to this, the plea of ​​the relatives of the Kovid victim for a bed seems to be a reflection of the disgraceful picture of the overall health situation in the whole country. Researchers fear that a more difficult day awaits India in May. According to them, it will not take long to change this picture if we cannot do contact tracing with asymptomatic people. Indians will see more difficult days. The number of deaths due to Kovid is increasing in New Delhi. It is increasing at such a rate that the line for burying the dead has fallen in the crematorium. The people of the capital are not getting a chance to say goodbye to their loved ones with respect. Nitish Kumar was forced to keep the body of his dead mother in his house for two days. Because, all the ‘slots’ are filled in all the crematoriums of the capital. Nitish was finally able to bury his mother last Thursday. But not in the crematorium. At the temporary cremation center in the parking lot of the Seemapuri crematorium in north-east Delhi! ”For two days, I ran to every crematorium in the city. But nowhere to be found. All admissions. The crematorium man said, “They have no more wood for burial.” Nitish was speaking at his mother’s funeral. He did not have any problems while treating his mother. Kovid was caught ten days ago by his mother. Who was a government health worker. Despite many attempts, the administration could not get a hospital bed for him. “The government is not doing anything. That’s what we have to do. In this situation, we are all alone, ”says Nitish. Jitender Singh Shanti runs an NGO called Shahid Bhagat Singh Sebadal. “No one in Delhi has ever seen this scene. A five-year-old child is being buried. A 15-year-old child and a 25-year-old youth are being burnt to ashes. The newlyweds are being buried together. It’s hard to see, “she cried. Wearing a PPE kit and a yellow turban, Shanti said last year, when the incidence of covid was at its highest, she helped bury at most 16 bodies a day. At that time the number of daily burns was eight to ten. The death rate there has multiplied this year. He had to help in the burial of 6 bodies at a center last Tuesday. This picture of the capital Delhi seems to depict the terrible situation of the whole country.