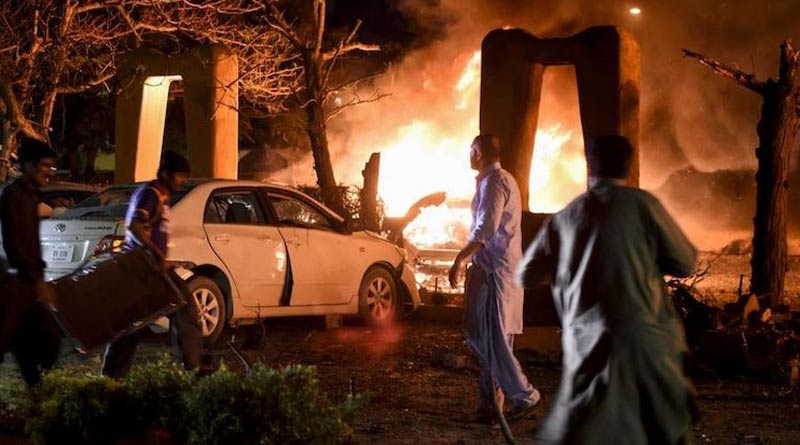 Published by: Biswadip Dey | Posted: April 22, 2021 8:49 am | Updated: April 22, 2021 9:05 am News Daily Digital Desk: Agnigarbha Pakistan. Deadly blast at a luxury hotel in Balochistan amid anti-French protests. There were 4 Chinese delegates including the Chinese ambassador in that hotel. Although they were saved because they were not in the hotel at that time. Four people were killed in the blast. 12 injured. It is believed that the attack was aimed at the Chinese representatives. What exactly happened? A car parked in the car park outside the Serena Hotel in Quetta, Balochistan, exploded late Wednesday night. The blast was reportedly caused by an IED. Pakistan’s Interior Minister Sheikh Rashid Ahmed told AFP that none of the Chinese delegates were at the hotel at the time of the blast. They went elsewhere to attend a meeting. That’s when the explosion happened. No militant group has claimed responsibility for the blast.

Unrest and sabotage are not new in Balochistan. The environment here has been turbulent for at least the last 10 years. The main reason behind this is the anger of the local people. Balochistan is rich in gas and metallic minerals. Nevertheless, the Baloch residents do not benefit financially in any way. Anger at China has been linked to allegations of exploitation against the Pakistani government. Beijing has invested heavily in the China-Pakistan Economic Corridor. As a result, although many new jobs were created, the local people could not benefit in that sense. As a result, the anger has intensified. For all these reasons, those areas have been repeatedly seen to be unsettled. Earlier, in 2019, 6 people were shot dead by gunmen in a luxury hotel. Pakistan’s stock exchange was also attacked last June. The Balochistan Liberation Army claimed responsibility for those attacks. It remains to be seen whether any militant group will take responsibility for the blast.