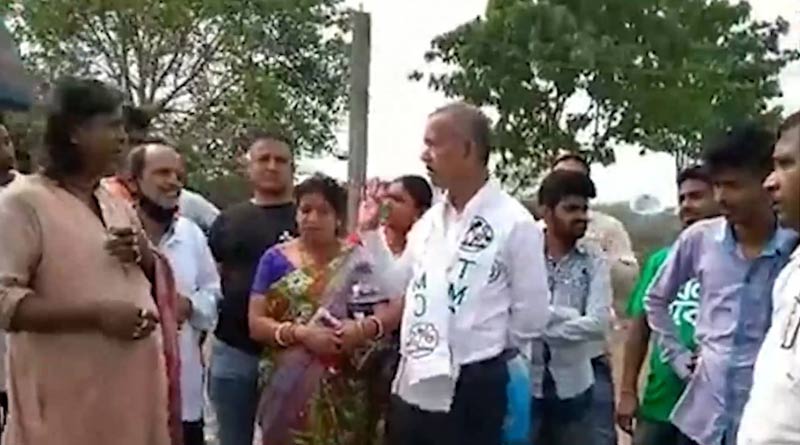 Tarak Chakraborty, Siliguri: Gautam Dev, a Trinamool candidate from Dabgram-Phulbari constituency, got involved in the debate by making outrageous remarks during the election campaign. The minister of state was accused of going to an ashram in his assembly constituency, calling the maharaja and threatening to overthrow him. It is alleged that he suddenly threatened Maharaja Sudhakrishna Das Goswami Maharaj of the ashram while going from house to house in the campaign. The video is already viral and has sparked controversy. The fifth round of voting in this center is on April 18.

On Thursday afternoon, Trinamool candidate and outgoing minister Gautam Dev went to the Thakurnagar railway gate in the Dabgram Phulbari assembly constituency. That’s where this happened. As can be seen in the viral video, the candidate called Maharaj and said, “Don’t do BJP-BJP here. This place is official, stay here. We will do whatever help is needed from the government. And if you oppose us, we will oust you from this place. I will give Gautam. I do what I say. I have all the reports. Don’t show me all those monks and nuns. I myself am a monk. Don’t do BJP. All grassroots must vote. I will not listen to anything. ”

“I have never threatened anyone,” the minister told reporters after the video went viral. Occupying a large government place and running a so-called ashram. However, that is not the ashram. It is the abode of BJP, RSS. That is why I have said that all these things will not work in government places. Vote I wanted. That is my right. I did not say anything in violation of the rules. ” In this regard, Sudhakrishnababu said, “Suddenly the minister called me and told me that if the Trinamool did not vote, I would be evicted from this ashram. I run an ashram. Members of many political parties come here and have various discussions. I agree with them. But no team does. I saw the minister here for the first time. My vote is not here. That is how the minister threatened me. ”

BJP candidate Shikha Chatterjee has demanded to go to the Election Commission against Gautam Dev’s behavior. “We will lodge a complaint with the Election Commission against the threat to oust the Trinamool if they do not vote in this way,” he said. The video of the outgoing minister went viral on Thursday, raising political tensions in the Dabgram-Phulbari assembly constituency.