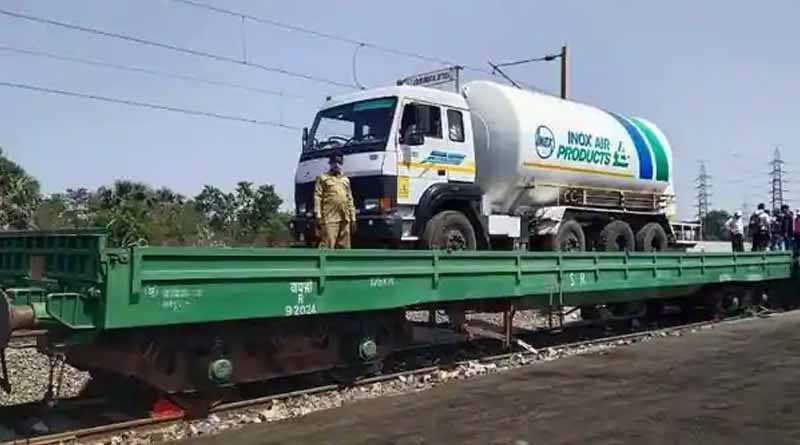 Published by: Arupkanti Bera | Posted: April 18, 2021 8:58 pm | Updated: April 18, 2021 8:58 pm News Daily Digital Desk: So far, oxygen has been transported mainly by road. But in the Corona situation, oxygen needs to be transported faster from one end of the country to the other. In this situation, Indian Railways has come down to the ground after the request of several state governments. Created route map and ‘Oxygen Express’. Plans have also been drawn up as to which way the oxygen tanker can be delivered. Oxygen is one of the most important components in the treatment of corona patients. It is claimed that there is not enough oxygen supply in different states. In this situation, the governments of Madhya Pradesh and Maharashtra have appealed to the railways to expedite the delivery of oxygen there.

The Railways has informed that ‘Roll on Roll Off’ or ‘RO RO’ method will be used for transporting liquid medical oxygen. In this method, the tankers carrying oxygen by road will be lifted on the flat wagons of the ‘Oxygen Express’ train. The tanker will be delivered to the specified destination. From there the tankers will reach the hospital by road. In this case, tankers of certain height have been considered. So that it is not difficult to take it on the wagon or on the road. Already in different parts of the country, due to lack of oxygen, multiple cases of patient death are coming to the fore. In Madhya Pradesh, at least 6 corona patients died due to lack of oxygen on Sunday. According to the government hospital, regular contact was being maintained with the oxygen supply company. But oxygen did not reach the hospital on time. In order to avoid such a situation, the railways have planned to transport oxygen by creating a green corridor.