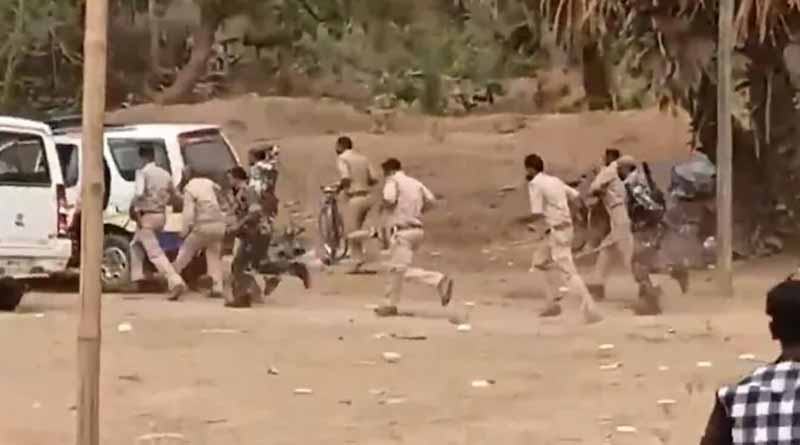 Published by: Paramita Paul | Posted: April 24, 2021 2:41 pm | Updated: April 24, 2021 2:44 pm News Daily Digital Desk: The second wave of COVID-19 infection is hitting the country. The infection is getting worse and worse. Yet the general public is not regaining consciousness. They meet at festivals, fairs and gatherings. And in order to make them aware, the administrative officials have to face retaliatory attacks. They are even being beaten. On Friday, the police officers of Saraikella in Jharkhand witnessed such an inhuman incident. Many people were gathering. The local administration took the initiative to close the fair for fear that a large number of people might be infected with corona. Accompanied by police, local administration officials appeared at the fair premises on Friday. The purpose was to persuade the authorities to close the fair. Stay away from talking, the locals get excited when they see the police administrative officials coming.

According to local sources, the crowd started protesting around the police and administrative officials when the fair was to be closed. Hundreds of people surrounded them. Unspeakable blasphemy began. The situation became so heated that the administrative and police officials started fleeing from the spot. There was no relief in that either. The locals chased them. Additional force was sent by phone to the nearest police station. When the extra troops came, the mad mob started throwing bricks around them. Several policemen were injured in their attack. Later, however, the police arrested the accused. Superintendent of Police of Saraikella Mohammad Arshi admitted the truth of the incident. He said police personnel were attacked while trying to close the fair. Six people have been arrested for throwing stones at them.