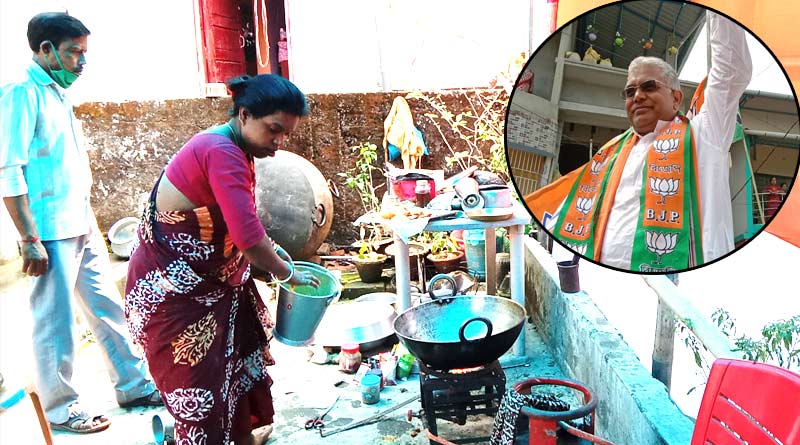 Arup Basak, Malbazar: The state president of the party will come. Lunch at his house. Santwana Das, a housewife from Malbazar, did not have time to eat. This time she is also the BJP leader of the area. He took care of everything and started cooking from morning. He made his own vegetarian panchavanjan. The red carpet was laid in the alley in front of the house. Neighbors also started coming as the day progressed. The girls were made by lighting five lamps. Take a look at BJP state president Dilip Ghosh. This was their hope. That hope was not fulfilled in this journey. Elsewhere the program was Dilip Babur. Went there. All arrangements failed. The preparation for joy became a reflection of despair in the news.

Dilip Ghosh had a pre-announced program in Malbazar town of Dooars on Friday. Accordingly, the state president of BJP held a road show. As there was a pre-announced road show, there was a lot of noise in the city. Party workers decorated the city’s street shops with flags, flakes and festoons. Besides, there was also activity from the administration. After the road show, Dilip Ghosh had lunch at the house of Santwana Das, the party leader and housewife of Netaji Colony in Ward No. 5. Longtime staff of the Consolation Goddess team. In the last municipal election, there was also a party candidate in ward no. Such a consolation goddess was well prepared after receiving the message of the arrival of the state president.

At around 2.15 pm, Mangal Urao, convener of the party’s Mal assembly constituency, said Dilip Babu had left as he was busy with emergency work elsewhere. When the time came in the future, he will surely come. The news made many people look a little disappointed. Although initially disappointed, Santwana Devi said, “He is the state president. He has programs everywhere. He is busy with the election. Maybe he left because he had an emergency program elsewhere. I was ready to hear he would come. The vegetarian was cooked. Many were waiting to see him. I was a little disappointed that he did not come. But I hope he will come in the future if he has time. ”