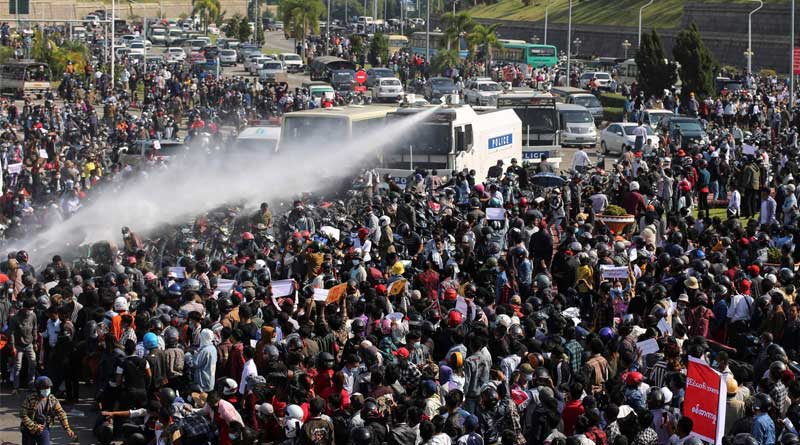 News Daily Digital Desk: The soil of Myanmar is soaked in the blood of democrats. This time, the junta issued death warrants in the name of 19 people for killing an army soldier. The army announced this on Friday night.

This is the first such warrant issued after a military coup across the country on February 1. Martial law was enacted in Yangon, North Okalappa District, on March 26. The law allows the military to convict anyone. Using that law, death warrants were issued in the names of 19 people. Thousands of Myanmar people have taken to the streets demanding democracy since the military coup. And the junta is using brutal force to suppress them. But this time the democrats have started retaliating. The Myanmar army issued death warrants against 19 people at the same time to punish the rebels.

Meanwhile, 10 more people died in Yangon on Friday. The junta fired indiscriminately at them. However, the agitators have made it clear that they are not moving away from the path of the movement. Despite the army’s demands, the Myanmar people want peace. So the fleet of this movement is gradually decreasing. “People want peace,” said Brigadier General J Min Toon, a spokesman for the Junta. So the fleet of the movement is decreasing. I appeal to the people of Myanmar to keep the peace. You help the security forces. ” The army promises re-election in Myanmar in the next two years.

The situation in Myanmar has worsened since the army killed 114 people in a single day a few days ago. Since then, the nature of the civil war has become clear there. Guerrilla forces in remote areas of Myanmar have begun covert resistance against the army. 20 or more armed guerrillas have roared against Junta’s behavior. Anti-military groups made up of exiled members of Myanmar’s parliament are also ready to help the guerrillas. Meanwhile, Junta was seen launching air strikes on guerrilla villages to control the situation.