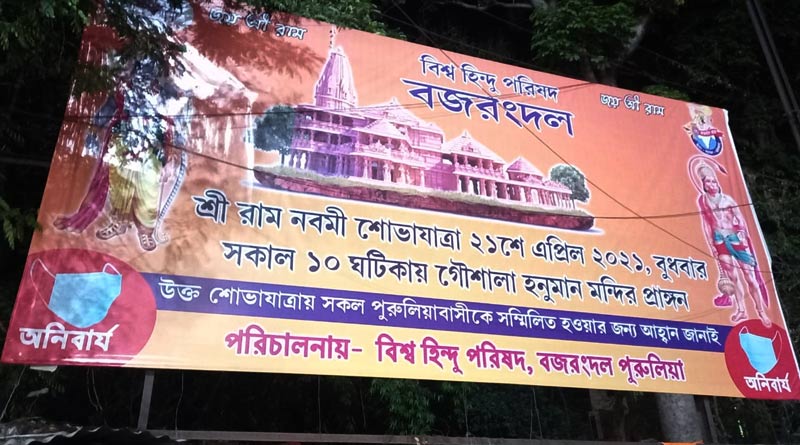 Sumit Biswas, Purulia: A new record of 429 infections in one day in Purulia. This is the record for the first and second episodes of Corona Virus infection (previously 319 infections per day in the entire district). Therefore, the organizers have canceled all the processions on the occasion of Ram Navami (Ram Navami 2021) across the district on Wednesday. Meanwhile, the World Hindu Council has decided to cancel the procession of Ramnabami in the entire state. As a result, the tide has turned in this district around Ramnabami. Shopping was not done that way. As a result, the trade and commerce of the district is also in recession. However, worship will be done in the Ram-Hanuman temples of the district according to the Kovid rules. The number of victims in the second wave of corona in this district is about two thousand. According to the district health department, the number of ‘active’ patients is 1923. The city of Purulia has the highest number of 441. On this day, 41 people were infected in this city in one day. In this way, the organizers stopped all the processions of Ramnabami due to the increase in the number of infections. This time the Purulia District Committee of the World Hindu Council organized processions in twenty blocks in addition to the three cities of the district, Purulia, Jhalda, Raghunathpur and Adra. Even though the assembly vote was held in this district, with the election in mind, the Gerua organizations planned to hold mass rallies in every program. The BJP extended a helping hand to the gathering across the district. But in a way that is breaking the record of Fee Day transition in this district, the World Hindu Council canceled all their procession programs. The Purulia Ramnabami Committee also canceled the procession. The Trinamool Congress (TMC) used to hold the procession under the banner of this committee.

However, despite the cancellation of the World Hindu Council procession, its members are still engaged in cowardly awareness campaigns at Ram-Hanuman temples across the district. They also cut round marks to maintain physical distance while worshiping in the temple. Masks will also be distributed during Pujo on Wednesday. Pintu Baury, district secretary of the World Hindu Council in Purulia, said, “We canceled the procession keeping in mind the way Kovid’s infection is spreading in the district.” However, we will continue our work in temples with temple awareness. ”Since the last panchayat election, there has been a lot of excitement and enthusiasm surrounding Ramnabami in this district. As soon as the BJP gained strength in the hands of various Hindu organizations in the district, a big festival took place around Ramnabami. This time don’t do thorns in that festival. Gaurab Singh, president of the Purulia Ramnabami Committee and president of the city Purulia Trinamool Congress, said, “We had a lot of arrangements for the Ramnabami procession. But we have canceled the program as the infection continues to increase by leaps and bounds. ”Subarna Roy, Sub-Divisional Magistrate, took to the streets in a hurry. He himself puts it on because there are no masks on the faces of the buyers and sellers of the shop, including the people walking on the road. He was accompanied by BDO of Jhalda number one block, IC of Jhalda police station. It explains why you should cover your nose and mouth with a mask. Mike also goes with the promotion. Also passengers of Toto, Auto, Bike, Trekker are made aware. Earlier, the sub-divisional magistrate held a meeting with BDO, block health officers and police officers to deal with the corona. Safe home and sanitation preparations were also discussed. Meanwhile, four new safe homes have been set up in the district. Deben Mahato Government Medical College and Hospital’s Hatoara Campus, Jhaldar Karmatirtha, Raghunathpur’s Joychandi Pahar Youth Home and Kashipur’s Block Primary Health Center. As the number of infections has increased, Purulia Municipality, District Administration and District Health Department have opened three separate control rooms.