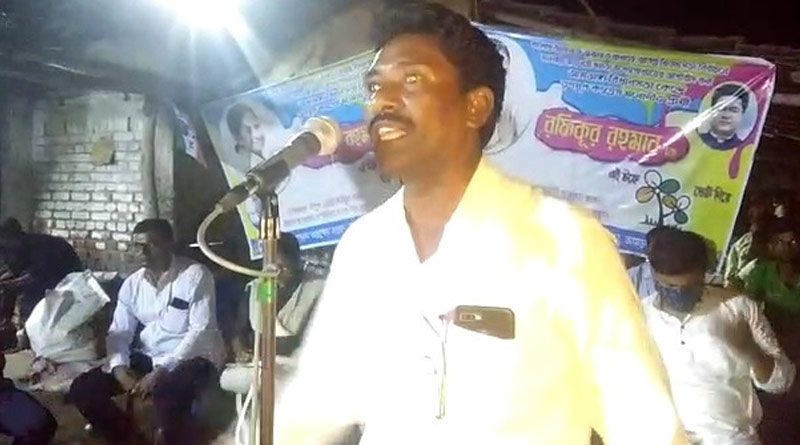 Arnab Das, Barasat: Three points have barely been completed in the Bengal vote. There are still 5 points left to vote. However, the mercury of propaganda is rising in him. Some are losing their temper while seeking votes, while others are increasing the pressure to vote for a particular political party in a warning tone. This time in Amdanga of North 24 Parganas, the party leader Sheikh Moinuddin went to campaign for the Trinamool (TMC) candidate and made controversial remarks. “Those who do not vote for the Trinamool will be deprived of Mamata Banerjee’s development project,” he said. Health friends, food partners – everything will be stopped. ” The video of his speech has already gone viral. The ISF leadership of the United Front in the area has naturally been vocal about the issue.

Amdanga Trinamool candidate Rafiqur Rahman had a street rally in the area on Thursday night. Trinamool leader Sheikh Moinuddin was campaigning for him there. Speaking on the stage, he said, “We have MLAs here, leaders. I am saying in front of everyone, those who will leave the grassroots and vote for another party, will have to be deprived of all the development projects of Mamata Banerjee in the coming days. There will be no government benefits. Health card must be blocked. Even if you take rations, the card will be blocked. Because, Mamata will eat Banerjee but will not sing for him, will not support! That will not work. Old age allowance will also be stopped. ” The name of ISF has come up more than once in his warning today.

Sheikh Moinuddin, who is optimistic about the Trinamool’s victory in the Ekushey polls, said in a de facto tone, “Elections have already been held in 91 constituencies. Speaking of responsibilities, the Trinamool will win more than 70 seats. Mamata Banerjee government will form the government again. And the remaining seats will be counted this time. ” He then warned that ISF would be deprived of development. Analyzing the political character of the area, it is understood that Abbasuddin’s party ISF is recently laying the groundwork in the minority inhabited areas of North 24 Parganas. This time ISF candidate Jamaluddin is contesting against Rafiqur Rahman. Part of the political circles think that this is Sheikh Moinuddin’s warning to organize public opinion against him.