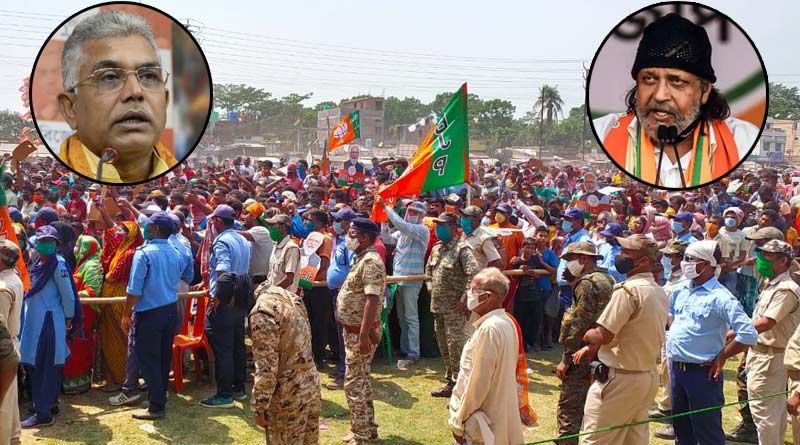 Published by: Sulaya Singha | Posted: April 24, 2021 5:11 pm | Updated: April 24, 2021 5:12 pm News Daily Bureau: Dilip Ghosh and Mithun Chakraborty are targeting the Trinamool Congress for breaking the Corona Pandemic rule. The Election Commission has already stated that no more than 500 people can be gathered at a public meeting. But the Trinamool alleges that more than 500 people thronged the two separate meetings of the BJP state president and the Mahaguru. Especially to see Mithun Chakraborty in Vaishnavanagar of Malda called the slope of people. As a result, allegations of violation of law have been raised against the two leaders. Dilip Ghosh had a meeting at Kusmondi in South Dinajpur. Complaining to the commission, the Trinamool said that there was a meeting with more than 500 people. Which amounts to a breach of electoral rules in the Kovid episode. That is why the Trinamool has demanded to stop all Dilip’s campaigns. Dilip Ghosh similarly broke the election rules in Kumarganj yesterday. Trinamool claims that the BJP state president has endangered the lives of many people.

Meanwhile, the same allegation was leveled against Mithun Chakraborty on Saturday. He broke the rules by holding a meeting with more than 500 people in Vaishnavanagar of Malda. The Trinamool has demanded strict action against Mithun. They demanded that the permission of all meetings of the BJP’s star campaigner be revoked. The commission should also take strict action against the BJP. Saugat Roy alleged that the commission followed the BJP’s lead. So the vultures are still roaming around. The whole country is trying hard not to deal with it. And BJP is doing politics. Everything is at the behest of Modi-Shah. A total of 3 complaints have been lodged since yesterday. However, no response has been received from the Election Commission yet. However, an FIR has already been lodged against the organizers of Mithun’s meeting. On behalf of the police, Alok Rajoria said that the returning officer of the center has lodged an FIR against the organizers.