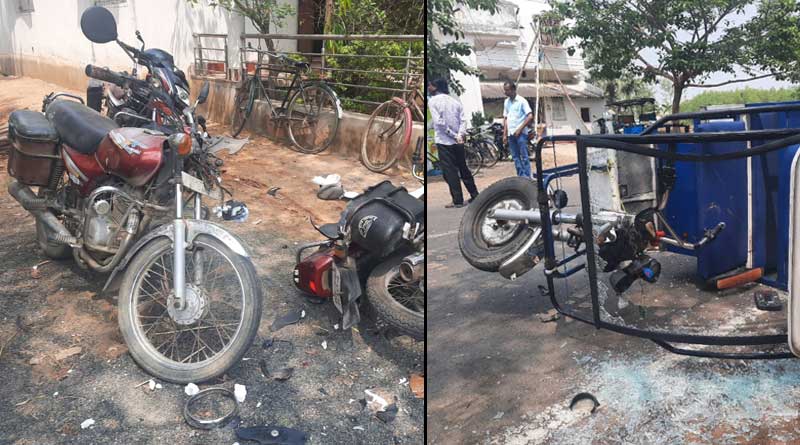 News Daily Digital Desk: Birbhum has been repeatedly heated by political unrest during the polls. This time the Trinamool (TMC) party office was attacked by thunder in Amodpur. Allegedly, the bike kept in front of the party office, Toto was also vandalized. The allegations are against the BJP. Upon receiving the news, the police reached the spot.

Along with Nanur, Parui is politically heated in different parts of Birbhum. The eighth round of voting in this district will be on April 29. But long before that, there were reports of political unrest in various parts of Rangamati. However, the Sangra Panchayat area of ​​Amodpur became a battlefield after the attack on the Trinamool Party office on Thursday afternoon. According to sources, the Trinamool party office was attacked during the meeting. Trinamool alleges that about 100 BJP supporters came with bamboo and sticks and attacked the Trinamool office in Sangra village. It is reported that three grassroots activists were injured. Local grassroots leaders were meeting at the time. In the meanwhile, no one got a chance to resist the attack. The arrow of accusation is against the BJP.

Upon receiving the news, the police went to the spot. They have to work hard to stop the clash between the two sides. On the other hand, allegations of attack on BJP office in Bagnan were leveled against the Trinamool. Besides, there are sporadic reports of Trinamool-BJP clashes on the other side as well. Such unrest is not new in voting Bengal. However, this year the polling is going on in eight phases with the highest number of central forces. This decision of the Election Commission is in the interest of keeping the law and order situation normal. Nevertheless, such violence cannot be avoided.