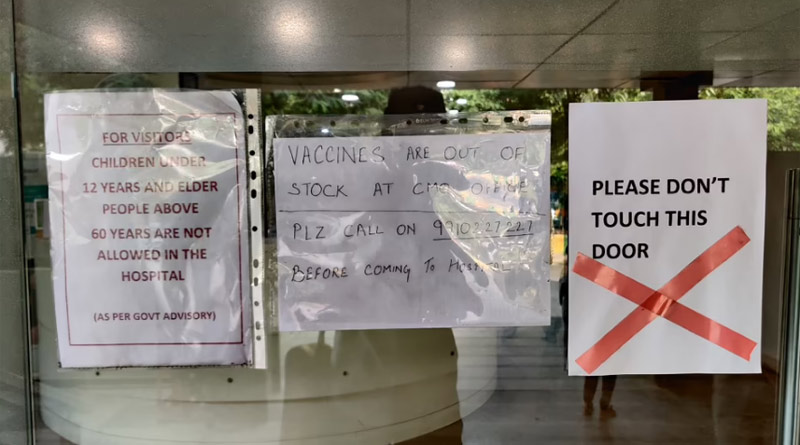 News Daily Digital Desk: On Wednesday, Union Health Minister Harsh Vardhan thwarted the Maharashtra government’s demand for a shortage of covid vaccine. He claimed that there was no problem in providing tickers. Maharashtra has demanded to cover its own failure in vaccination. This time the same picture was seen in Ghaziabad of Uttar Pradesh. Many private hospitals there have reported no vaccinations since last Monday.

On Wednesday, Maharashtra Health Minister Rajesh Toppe said there were only 1.4 million more corona vaccine doses in the state. Not only Maharashtra, but also several states including Delhi and Punjab have reported shortage of vaccines. The Center has dismissed all the allegations. This time many private hospitals in Uttar Pradesh made the same demand. The head of a hospital in Ghaziabad told an all-India media, “We have not had any stock of ticks since Monday. We were able to vaccinate only 50 people on Monday. On other days at least 200 people were vaccinated. Vaccination has been completely stopped since then. We are in complete darkness about when the vaccine will be available again. ”

India is going through the most terrible time of the Corona period. The number of daily coronavirus cases in the country is setting new records every day. On Thursday, the number of daily attacks in the country has crossed one and a half lakh. Which is much higher than last year when the country’s corona infection was at its peak. In the last four days, the number of daily attacks in the country has exceeded one lakh. These figures are enough to scare. In such a situation, the center has insisted on completing the vaccination quickly. After taking the second dose of corona vaccine on Thursday, Prime Minister Narendra Modi wrote on Twitter, “This vaccine is one of the ways to lose corona.” He appealed to those who are eligible to be vaccinated to get vaccinated immediately.

Several states have already imposed night curfews and partial bans to curb the growing corona infection. The new addition to that list is Madhya Pradesh. A complete lockdown has been called for the next seven days in Chhindwara district of the state. Besides, there is night curfew in urban areas. Besides, it has been decided to keep government offices open five days a week for the next three months.