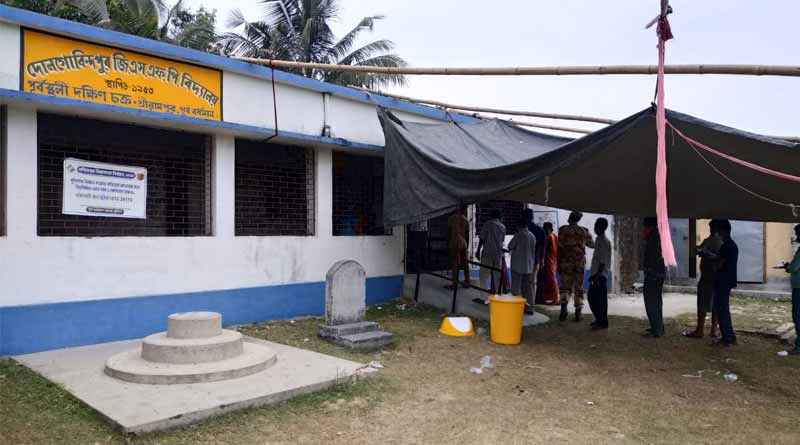 Published by: Paramita Paul | Posted: April 22, 2021 11:15 am | Updated: April 22, 2021 11:42 am Abhishek Chowdhury, Kalna: Hot politics in Bengal with the slogan ‘Joy Sriram’. Based on this slogan, the sixth day of voting was tumultuous. This time in the middle of the voting process, the slogan ‘Jai Shree Ram’ was heard on the face of the polling officer himself. However, the commission removed the polling officer from the booth for this behavior. The incident in Purbasthali on Thursday morning has caused a great stir. Today is the sixth phase of the state assembly elections. Voting is going on under tight security. Meanwhile, mock polling was going on in booth number 35 of Gobindpur GSPA Primary School, Dolpur before the start of the polls. It is alleged that the third polling officer in charge of the election suddenly chanted ‘Joy Sriram’ during the mock poll. After that the excitement spread. It is learned that Third Polling Officer Orkajit Bhattacharya said at the end of the mock poll, “Joy Sriram, everything is fine.” After saying this, the Trinamool booth agent objected. The accused third polling officer was immediately removed by the Election Commission officials.

Upon receiving the news of the incident, the outgoing minister and Trinamool candidate from the Eastern South Assembly constituency Swapan Debnath visited the booth. Swapanbabu said, “If no action is taken against him, I will go to all the booths and say Joy Bangla.” BJP candidate Rajiv Kumar Bhowmik Palta said, “It is not a crime to call Joy Sriram. It is not a political slogan. This should not affect the voting process. ” Regarding the response of Swapan Debnath, the BJP candidate said, “Joy Bangla slogan is not from this country. Slogan of Bangladesh. I don’t mind if he wants to establish that culture here. ” Sudipta Sinha, presiding officer of the booth, said, “Joy Sriram, the third polling officer, said during the mock polling. He was immediately removed. ”