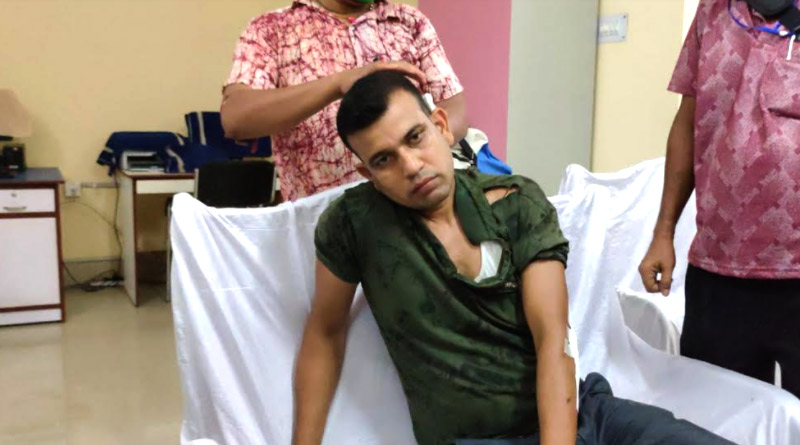 Published by: Suparna Majumder | Posted: April 21, 2021 7:31 pm | Updated: April 21, 2021 7:31 pm Ramoni Biswas, Tehtat: A presiding officer was allegedly beaten up by a state police officer. The incident took place at noon on Wednesday at the DCRC center at Betai Polytechnic College in Tehta. After the incident, the voters started protesting at the center. Prolonged chaos ensues. District Land Reforms Officer Anish Dasgupta, BDO Shubh Singh Roy of Tehatta 2 block, SDPO Prosenjit Bandopadhyay of Tehatta and other police personnel reached there to handle the situation. Sukanta Biswas, 18 polling presiding officer, went to track the police there on Wednesday afternoon. He alleged that a policeman named Thakurdas Mahato was repeatedly called to the mic but there was no response. After some time, when he was found, Sukant Babu said to get in the car as soon as possible. It was then that Thakurdas Mahato allegedly attacked the presiding officer. Sukantbabu claimed that when he escaped and fell down, the policeman and his assistants beat him severely with sticks. He also kicked. Serious injuries.

Sukanta Biswas was seriously injured in the incident. Administrative officials took him to Tehatta Sub-Divisional Hospital. Despite many attempts, it was not possible to contact the accused policeman Thakurdas Mahato. However, a section of the administration claimed that the incident took place due to disagreement between the presiding officer and the police personnel. Tehtat SDPO Prosenjit Banerjee said, “As far as is known, there are faults on both sides. However, the upper house will take action after checking it. ” District Magistrate Perth Ghosh said, “We have spoken to the Krishnanagar district police superintendent. After investigation, appropriate action will be taken against the culprits.”