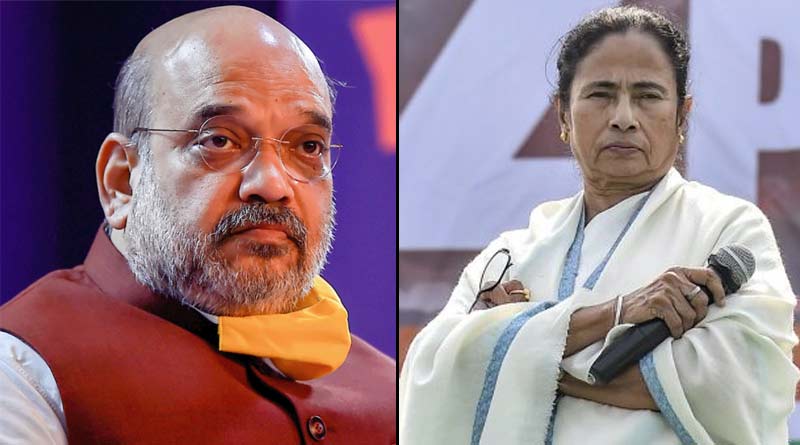 Raja Das, Balurghat: “The infiltrators are your vote bank”, this is how Amit Shah attacked the Trinamool supremo on Thursday from a meeting in Harirampur. Amit Shah held a meeting at Harirampur on Thursday ahead of the West Bengal Assembly elections. Due to Corona, only 500 people were allowed to attend the Shah’s meeting. Amit Shah went to the meeting long after the scheduled time due to rain in Siliguri. There he said, “There is no such thing as a record of my sister’s work. Listen to his speech. From the beginning to the end of the speech, the Prime Minister and I were insulted. Said external, external and external. Can the Prime Minister of the country talk to the people of Bengal? He threw questions at the common man. In the words of Shah, “I was born, raised and raised in this country. May my death take place in this holy land and I want to be cremated here. I’m not an outsider. ” After firing on Mamata Banerjee, the Home Minister said, “Your vote bank is completely intrusive. These intruders are external. You want to rule Bengal by relying on him. ” In Shah’s words, “The grassroots will not be able to stop the infiltrators, nor will the Communist-Congress. Because, these infiltrators are the vote bank of the three parties. ” Then Shah said, “BJP formed the government on May 2. We will build a government where even individuals or insects will not be able to set foot on the border. The BJP’s resolve is to stop the infiltrators in Bengal, that is for sure. ”

Amit Shah said the BJP government was adamant about implementing the CAA. In his words, Matua, Namasudras should get citizenship. Home Minister Mamata Banerjee sneered and said, “Mamata Didi, your time is up. The BJP government will come. I promise to give citizenship to those communities as well as give them due respect. ” Amit Shah made a real storm from the stage by presenting several development ledgers. He said that Bengal was ruled by communists and sisters for so many years. But there has been a lot of injustice in North Bengal. Didi did not work for the development of North Bengal, nor did the Communists. They have always seen North Bengal as honest. On the same day, Shah promised that the 65-kilometer Kolkata-Siliguri Netaji Subhash Chandra Bose Highway would be built as soon as the BJP formed the government in Bengal. With which you can go to Calcutta in three hours. I will take the help of the center to build the Tetulia corridor quickly. Chopra can be extended from Jalpaiguri and Mainaguri in Uttar Dinajpur district through Tetulia district of Bangladesh. He also made several more promises. Sangbad Pratidin News App: Download to get the latest news updates News Like every day to stay in the regular news Like on Facebook and follow on Twitter. Get all the news updates NewsDaily on News Daily