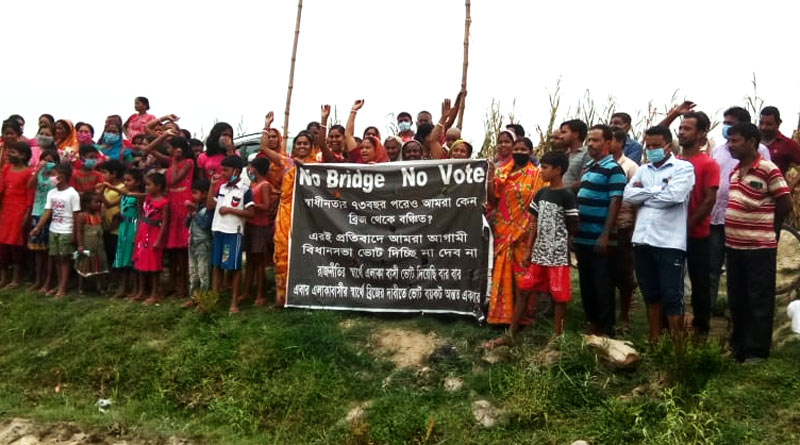 Published by: Suparna Majumder | Posted: April 22, 2021 11:19 am | Updated: April 22, 2021 11:19 am Shankar Roy, Islampur: Seventy-five years of independence. Even today, the voters of Sherpur Gram Panchayat of Hemtabad have not got a bridge. So everyone has decided not to vote on Thursday. He has called for a boycott of the West Bengal Election. All of them went to the banks of Kulik River and protested with banners. Subarnapur, Foksa and Sherpur polling stations of Hematabad have been empty since morning. Voters, polling officers, security forces. Everyone is there. Only voters are not seen. About five thousand people live in the whole area. The number of voters is three thousand. From morning till 10 pm only three people went to booth number 129 and cast their votes. And no one stepped on the shadow of the booth. There are no polling agents in any booth. Eight to eighty people are protesting along the Kulik river. The banner reads, “I have repeatedly voted in the interest of politics. This time in the interest of the locals, boycott the vote at least once to demand a bridge. ” Residents complained that the matter was also reported to Trinamool Zilla Parishad chief Purnendu De. But to no avail.

Kulik is a transboundary river between Bangladesh and India. Raiganj is one of the best means of communication with the city. Residents of areas like Subarna Roy and Rourak said that they have to go to Raiganj for any big work. Even if children, women or the elderly get sick, they have to suffer. When the bridge was built, one had to cross a 6 km road to reach Raiganj Hospital. It now has to cover a distance of 24 kilometers. That is why the residents of the area have chanted the slogan ‘No Bridge No Vote’. CPM Candidate Debendranath Roy last won the Hematabad Center reserved for the Scheduled Castes. This time Bhupendranath Barman has become the CPM in this center. Satyajit Barman has become the Trinamool Candidate (TMC Candidate). BJP candidate Chandima Roy.